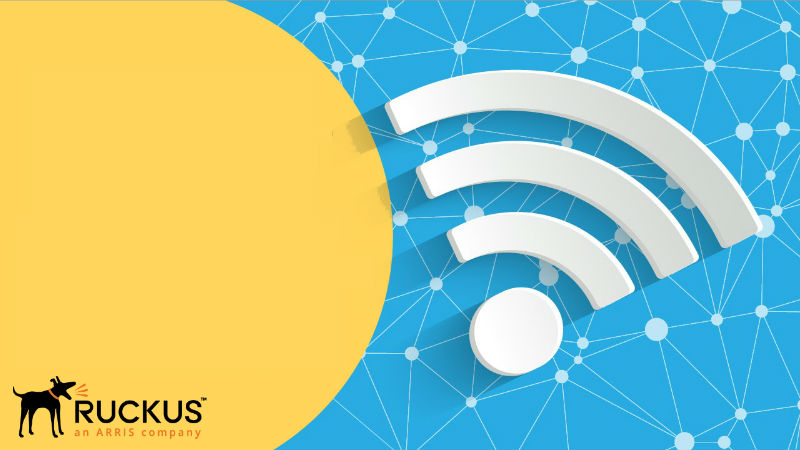 Worldwide data and video traffic is growing at double-digit rates, driven by an increase in connected devices. ABI Research predicts that Wi-Fi device shipments will grow to nearly 35 billion by 2022. Data and video traffic also will surge due to increased per-device data consumption driven by applications like 4K video streaming, virtual and augmented reality and live-stream gaming.

“Ruckus customers and partners demand more when it comes to their networks,” said Ian Whiting, president of Ruckus Networks. “We have a long history of delivering products and technologies that go beyond the current state of the art to meet the world’s most demanding network requirements while driving down the cost-per-connection. Ruckus R730 and Ruckus Ultra-High Density Technology Suite are the latest examples.”

The congestion of people, devices and bandwidth-hungry apps makes for challenges that current wireless tech cannot handle. Adding to the complexity of this environment are diversifying device categories and apps, such as instant messaging, IoT control messages and voice-over-Wi-Fi.

“Real-world use cases are bumping up against the limits of existing Wi-Fi standards, and the need for 802.11ax to address a wide variety of heterogeneous, high-density scenarios is clear,” said Chris DePuy, founder and technology analyst at 650 Group. “Ruckus has already differentiated itself in the realm of network consolidation. With this launch, Ruckus is reinforcing that by setting the stage for converged Wi-Fi, IoT and LTE deployments.”

The new 802.11ax standard was designed for high-density connectivity, with the ability to support up to a four-fold capacity increase over its 802.11ac Wave 2 predecessor. With 802.11ax, multiple APs used in dense device environments are collectively able to deliver required quality-of-service (QoS) to more clients with more diverse usage profiles due to the use of orthogonal frequency-division multiple access (OFDMA) and multi-user multiple-in multiple-out (MU-MIMO) technologies.

Increased end-user expectations and application QoS requirements pose unique difficulties to network designers. Locations such as stadiums, public venues, train stations, and schools in which video content and applications are central to the curriculum, are representative examples. The R730, supporting eight spatial streams on 5 GHz and four spatial streams on 2.4 GHz, is better able to address those expectations through increased capacity, improved coverage and performance.

“Train stations are especially challenging Wi-Fi environments due to spikes in client count each time passengers exit a train,” said Tetsuo Mukai, general manager, KDDI. “We challenged Ruckus to help us improve the in-station experience for subscribers with devices that were already on the network when the train arrives, and Ruckus came back with a solution that dramatically reduced the impact of these transient client events on affected subscribers, minimizing throughput degradation and shortening recovery time.”

The Ruckus Ultra-High Density Technology Suite addresses these challenges using techniques that go beyond the 802.11ax standard, including:

“At Golden 1 Center, we’re committed to delivering the best fan experience in the industry. One of the ways we deliver value to our fans is to build a network that enables live streaming during the games. This is incredibly challenging to do in a venue like ours with as many live-streaming fans as we have,” said Ryan Montoya, chief technology officer, Sacramento Kings. “Ruckus was up to the challenge and demonstrated to us several innovative features that let us squeeze the most out of our available spectrum, ensuring no connections are dropped and that adequate bandwidth is available for anyone that wants to live-stream the game.”

The R730 includes embedded Bluetooth Low Energy (BLE) and Zigbee radios and can be augmented with Ruckus IoT modules to support additional physical layer protocols such as LoRa. Using the Ruckus IoT controller, these separate networks and the IoT endpoints associated with them, can be managed, coordinated and connected to IoT cloud services as part a single, converged IoT access network.

Making users safer at home, in the office and in public

The R730 will implement the next-generation WPA3 wireless security protocol and Wi-Fi Enhanced Open. Users with compatible devices will benefit from significant security enhancements, including:

Getting the most out of your 802.11ax deployment
The 802.11ax standard and the R730 offer a step-function increase in over-the-air throughput. To make the best use of that new capacity, network designers need to optimize the wired access infrastructure to support it, while minimizing upgrade costs. Ruckus helps network designers by:

“Many of our customers have future-proofed their networks with the Ruckus ICX 7650 switches, in anticipation of the upcoming 802.11ax access points,” said Don Gulling, president and CEO of Verteks Consulting. “The launch of the R730 enables us to quickly get these APs into the hands of our customers that serve high-density Wi-Fi deployments such as stadiums, auditoriums and large public venues. These APs and switches will provide our customers with what they need to meet next-generation demands.”

The R730 will be generally available this calendar quarter. The Ultra-High Density Technology Suite is available now for use with all Ruckus APs.

Ruckus Networks, an ARRIS company, is redefining connectivity around the globe. With our partners, we build secure wired and wireless access networks for organizations that place a premium on connectivity experiences for end users as well as networking simplicity for IT.

Copyright © 2018 ARRIS Enterprises, LLC. All rights reserved. Ruckus, Ruckus Networks and the Ruckus logo are registered in the U.S. and other countries. Other names and brands mentioned in this document or website may be claimed as the property of others.