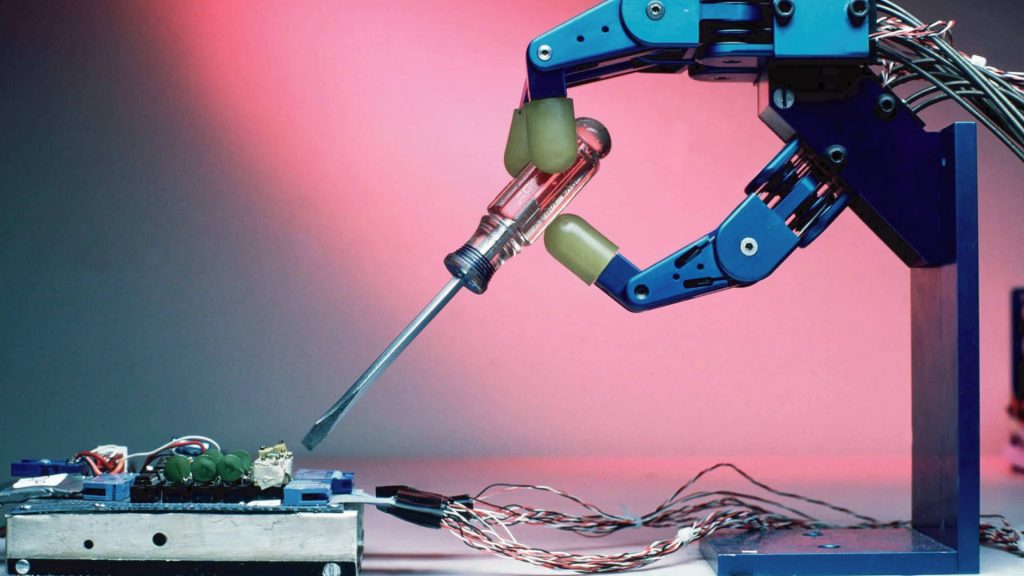 United Robotics Group, with global offices in Bochum, Germany and Paris, France opens its North American subsidiary based in Los Angeles, California, and simultaneously launches the future of human-robot collaboration with CobiotX.

CobiotX robotic solutions not only introduce a new era of robotics, but altogether bring an innovative approach to the market, encompassing the principle that the human-robot relationship should focus on the human. CobiotX is “Robots for humans.”

“The first generation of robots, classic, large industrial robots, were programmed to work independently from humans. With the second generation, small, lightweight cobots, collaboration with humans was possible. With CobiotX, we are completely revolutionizing the way humans interact with robots, allowing humans to focus on highly valued human interaction while ensuring a safe environment,” said Thomas Hähn, Founder of United Robotics Group.

An American footprint for the European robotics leader

The company officially registered its presence in September of this year opening United Robotics Group Americas Inc., headquartered in Los Angeles, California and headed by CEO, Corwin Carson. Operating as a subsidiary of United Robotics Group GmbH, the Americas group provides key access to the North American market for robotics, service and support for the company’s growing global customer base and connects European and North American engineering and technology experts.

The eight companies that have merged under the United Robotics Group umbrella each bring products, services, software, or integration solutions, and will be represented by the Americas group. This includes U.S. based resources for solutions development, integration, and production capabilities. United Robotics Group Americas Inc. will offer CobiotX solutions both for purchase and with simple, innovative, and aligned Robot-as-a-Service pricing models.

“Unprecedented labor market challenges are creating a strong tailwind for the adoption of robotics and automation beyond traditional industries like manufacturing and logistics, creating a massive expansion opportunity in the market. One example is the hospitality industry, where 500,000 jobs go unfilled each month,” explains Corwin Carson, CEO of United Robotics Group Americas Inc. “We will be in a unique position to provide North American businesses direct access to innovative global technology to help address these challenges.”

Responding to the evolving challenges of the hospitality industry with CobiotX

The world’s first cobiot, Plato, makes its debut at the Florida Restaurant & Lodging Association Show in Orlando, Florida November 2-3 and in Europe at the French hospitality show, Equiphotel, starting November 7.

Developed in Paris and manufactured in Europe, Plato is an autonomous mobile platform designed to support service workers in a variety of daily tasks, including the delivery of food and drinks and bussing tables and responding to unexpected situations and obstacles, ensuring safe movement when surrounded by human traffic.

By combining the functions of industrial and social robotics, with its optimal HRI (Human-Robot Interface), Plato inherits the interactivity and expressivity from the world’s well-known humanoid robots, Pepper and NAO, and the high-level standards of stability and reliability found in industrial solutions.

“Plato was inspired by smartphones designed for humans, instead of power-hungry, difficult to update PC-based hardware. The architecture used in the development of Plato’s “neural engine” is designed for seamless updates adapting to fast-changing environments,” explains Xavier Lachérade, Managing Director of Aldebaran Robotics, part of United Robotics Group. “A complete set-up can be done without any technical knowledge in less than one hour simply by pushing the cobiot manually or remotely configuring it on a tablet, and modifications can be applied with ease.”

With additional features like a hands-free Bluetooth command microphone, Plato has the capacity to further augment service workers’ capacity to support parallel tasks. Plato also enters the market as the only serving robot that complies with the widely accepted European Machinery Directive 2006/42/EC, which aims at the free circulation of robots in an uncontrolled and changing environment and at the protection of service workers and consumers.