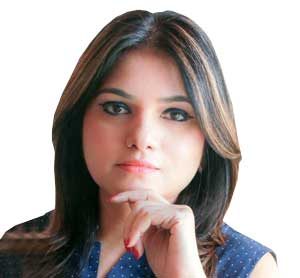 “I think it is a beautiful time when the man-machine collaboration, creative thinking and technology adoption must go hand in hand.”

1. Tell us a little bit about your role and how you got here?

How did I get here, well, It’s been an interesting career path. I was a journalist with NDTV and at that time I was also the technology editor, covered the new economy sectors like IT, BPO sector, telecommunications, Retail and Infrastructure.

And then, there was also a company I worked with where I launched a digital platform or the corporate television of sorts in about 11 countries and at some point I have also done sales and marketing for customer experience analytics, I headed that and was a founding member of one such company which eventually got sold . at some stage I was also selling Business intelligence and analytics for Tech Mahindra in Europe. I am also a media trainer and crisis communication is one of my key areas of specialisation. I do and I was a senior partner of the media training worldwide India.
Broadly, my expertise includes business journalism and television marketing, executive communication and digital sales and marketing and corporate communication. Public Relations and Public Affairs, also video production is pretty much of my forte and this by and large, what I do.

2. Given the massive proliferation of Information and software technology, how do you see the IT market evolving over the next few years?

Seeing it from marketing communications perspective, the scope of technology is immense.

I think it is a beautiful time when the man-machine collaboration, creative thinking and technology adoption must go hand in hand.

Because otherwise in this fast-paced world we are in, we will miss the woods for the trees. What I essentially mean is that we need to focus more on creative thinking, strategic thinking , doing things differently in a way and bringing a lot of technology for instance automation in the work which is repetitive , which has a defined process, which doesn’t really require new thinking to introduce speed and scale. When you introduce technology as well, which is pretty much beyond the human capabilities and ofcourse there is also consistency, so when you know there is a process well defined, you automate it and you keep the algorithm in way that helps to not only scale up the process but also, to get the desired result out of it.

And another fact is that, we can truly go digital, there is no corner of the world where you can’t reach if you have technology backing you. So, the whole idea of communicating is to reach out to the audience as after all it is always about them and never about you. If you are going to reach to a global audience irrespective of where you are, it is only technology that empowers you to do so.

Looking at the storage cost, speed of internet, the whole 5G world becoming a reality, we are living in a world of hyper connectivity, connected experience. SO, technology is going to be absolutely critical in paving that path. Ofcourse in a big way, I see, the AR and VR, (augmented reality and virtual reality) taking over experiences as well, we are going to be in the age of experience where everything is immersive in the era of mass personalisation.

All of these will need huge amount of technology, huge amount of analytics, data crunching, all of it has to come together and form an equilibrium where the creative mind and technology might can learn to co-create , collaborate and grow and enhance the human experience and the planet as whole.

3. What is the single most important technology?
It’s hard to pinpoint because in my view it’s always going to be a combination of things and it’s all inclusive rather than exclusive. So, for instance, one thing that stands out really is an evolved artificially intelligence world where it’s not just intelligent, but is also emotionally intelligent. So, you’re talking about an evolved sense of your place where there is emotional intelligence and there is artificial intelligence that sort of comes into play. So, for example, how do you decipher satire or irony or pun that is still an area of study that is grappling with but a true AI driven world can be a very empowering world, a world which is very different, a world which is a game changer, a world which is just another orbit, just another league and which will be substantially different than what it is today. So, you know, something which actually can be embedded in human conversation. I am emphasizing constantly that the technology has to become more human, has to be more embedded, and has to become more seamless in human experiences, etc. A true AI driven world can bring in that and I insist again on the word emotional intelligence is going to be an absolute key.

4. What’s the biggest challenge that you in your organizational role need to tackle to make any strategic decisions work?
Today the biggest challenge, in front of any organization, is the challenge of survival. I don’t think the question is not ‘if disruption will happen or not’, the disruption has already happened. The question is, ‘Will you really survive?’ What will you do in the future is secondary. I think this is the fight for survival and the organizations which transform, which disrupt themselves faster, which adapt to the new world faster, are the ones’ who are going to survive. And it’s going to be a world which is collaborative, which believes in co-creation. There are no borders anymore, there are no physical organizations anymore, and it’s a fluid connected world where you have to collaborate with folks you haven’t collaborated before, you will have to work with startups, you’ll have to work with individuals, you’ll industries and technologies that you haven’t worked with before. You will have to start working with machines and chatbots, kits a word which is different. You have to be able to train drones, service drones, train and service robots, so it is going to be a different world and the companies and the organization which are disruptive in their thinking, adaptive, willing to learn, willing to shed the old ways and willing to really think new in this digital world other ones which are going to be leaders. Ofcourse, there will be emerging companies as well, there will be different companies, new companies, new organizations that we haven’t heard of before. There will be new gurus in this digital era in some sense. So, interesting world and it will be bit rich to say that the world which is coming is a known world, the world which is coming is really an unknown world but the least and the most we can do is to be prepared for the change.

5. What is your take on the massive explosion of IT across so many categories? Do you see competition, opportunities to partner and/or integrate?
Some reports suggest that the number of apps India downloads today; I think in 2018 more than 12 billion apps were downloaded. Now that’s the world we live in and frankly I myself love it, because the apps make your life so much easy, whether you are paying your phone bills or whether you want to manage your entertainment or you want to schedule a travel or you want to book a hotel or want to play with photography, poetry, utility or want your veggies on time at 7 o’clock in the morning, or want flower delivered, just about everything and anything is online today. I frankly, am pretty much online as well with almost all utilities in the world, as well as I also have games ofcourse like word plays. So whether it is entertainment, information, news, views, groceries, utilities, travel, health, almost everything is in my palm on my phone, that is why I say if there is one thing that is going to define the world is absolute the world of 5G. This device is only going to go more powerful, perhaps there will be no device in our hand anymore, probably there will be more virtual device etc. but at the end of it apps have come to rule our lives, they are the friends of this era. I am quite apps friendly myself.

Tuhina is the Head of Global Corporate Communications at Tech Mahindra. Prior to Tech Mahindra, Tuhina was the Vice President at Media Training Worldwide, and Associate Editor at Aegis News Network. Tuhina has also worked as an anchor and a business journalist in the capacity of an Associate editor –Technology for NDTV PROFIT and NDTV.
A person of many facets, she is also the founder and curator of tucom.in. Tucom is a well-known and renowned specialist firm that works with CEOs, Top level executives, CXOs and Board Members on executive and leadership communications.
Tuhina is an expert on Business Intelligence and analytics and was previously the Sales Head of BI & Analytics Division at Tech Mahindra in Europe. She was also the founding member of an Analytics start –up, Ananto.
Tuhina has a Masters in Communication studies, Media Research and holds a Major in Accountancy.

Tech Mahindra represents the connected world, offering innovative and customer-centric information technology experiences, enabling Enterprises, Associates and the Society to Rise™. We are a USD 4.9 billion company with 113,550+ professionals across 90 countries, helping over 926 global customers including Fortune 500 companies. Our convergent, digital, design experiences, innovation platforms and reusable assets connect across a number of technologies to deliver tangible business value and experiences to our stakeholders. Tech Mahindra is amongst the Fab 50 companies in Asia (Forbes 2016 list).