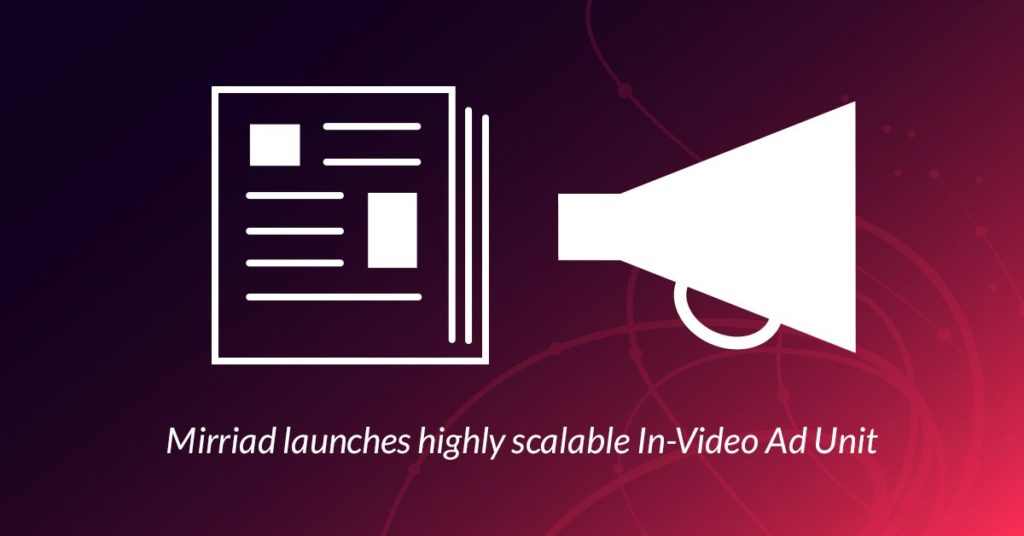 The power of content marketing has been understood for decades, but has been very difficult to scale as each brand instance is different and consistency against media planning or buying, including programmatic, has been virtually impossible. Mirriad has delivered the new ad unit at a time when audiences are tuning out of traditional video advertising but are consuming more video content than ever.

This first of its kind, patented technology solution enables advertisers to embed their brand messaging and imagery within premium content in multi-title content across different platforms including video on demand and linear broadcast. Independent research, such as the recent large scale in-video campaign delivered in China, has shown that in-video advertising consistently delivers meaningful results to advertisers who can now reach millions of viewers across select video entertainment platforms around the world.

Mirriad In-Video Ad Units embed products and brand signage within the visual narrative. For example, an advertiser’s message might appear as ad units containing signage such as billboards, posters, mobile or TV screens and be combined with others displaying the brand’s product, all digitally rendered to be contextually relevant and blended naturally with the content. The combined effect of these ad units drives high levels of effectiveness and even more so when combined with traditional pre-roll advertising.

Mirriad solves the challenge of consistent delivery of the ad units by developing an automated measurement and gating technology called the Visual Impact Score (VIS), integrated into its advertising platform. VIS solves a formidable problem by ensuring each instance of ad exposure meets thresholds known to drive effectiveness such as exposure size and proportion, clarity, proximity to action and prominence.

Mirriad commissioned independent research from global measurement and analytics firm comScore to test the viability of creating an independent evaluation process for Mirriad’s in-video insertions. comScore analysed a random sample of Mirriad ad units from a recent campaign. The initial analysis demonstrated that 98.5% of the 261 sampled ad units passed the independent comScore reference standard based on statistical tests. Full study results are available in a white paper.

“comScore has been measuring branded content and product placements for over a dozen years, providing consistent measurement for brands, agencies and networks,” said Gary Warech, senior vice president, branded entertainment, at comScore. “In working with Mirriad, we analyzed a sample of its new in-video ad units on a recent campaign. We look forward to continually working with Mirriad to execute similar tests on future campaigns.”

A separate study, by digital marketing company Miaozhen Systems and commissioned by car leasing company Tangeche, evaluated the overall brand effectiveness of Mirriad’s In-Video Ad Unit after a 24-week campaign which ran on Alibaba’s entertainment platform Youku. According to the study, Mirriad’s in-video ads delivered nearly 800 million impressions and drove a 17-point uplift in brand awareness with 94 percent of the exposed audience planning to take follow-up action. Miaozhen Systems has also independently verified the reliability and consistency of the in-video ad unit and Mirriad’s VIS.

Mirriad creates advertising opportunities within existing video content across multiple shows. Advertisers can reach target audiences in a contextually relevant way without interrupting the viewing experience. The new ad format can be used alone or combined with other media and is aligned with existing media trading.

Mirriad is headquartered in London, with offices in the leading advertising markets in the world: New York, Mumbai, Shanghai and São Paulo.