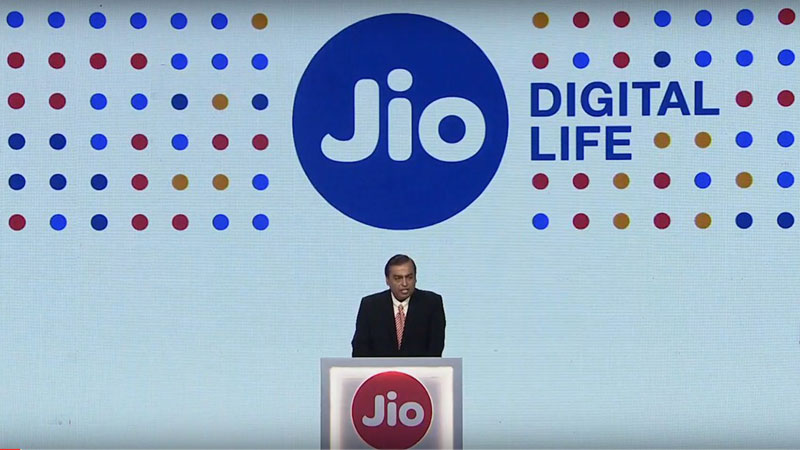 India’s current second largest telecom operator by revenue share is rapidly expanding into other sectors to strengthen its position in the telecom industry. From cryptocurrency to IoT (Internet of Things) to building a 5G Network, Reliance Jio has a bunch of plans ready for its future expansion.
The company recently acquired US telecom software firm Radisys to work on its future services like Internet of Things (IoT) and 5G network. As per the industry estimates, IoT in India will be worth over $9 billion by 2020.

How Are Telecom Services Transforming?
In the last couple of years, the data costs have dropped drastically by around 90 percent, whereas the voice tariff by around 60 percent. The gross revenue has declined by 8 percent YoY to Rs 2.6 lakh crore in 2017. With more data and OTT offerings, the telecom industry is experiencing a massive change over the demand of services.
The focus has shifted from core telecom services to emerging technologies. Telecom companies have already started to tap into the areas such as Internet of Things (IoT), Artificial Intelligence (AI) and Machine-to-Machine (M2M) aggressively.
The Growing IoT Ecosystem in India
IoT in India will experience a growth of 31 times and will reach 1.9 billion by the end of 2020 from current 0.06 billion. The revenue will also rise to $9 billion from $1.3 billion in 2016, a mammoth rise of 700 percent. The Indian government at the same time is also looking to create a $15 billion IoT industry in the country by 2020.
Apart from building a 5G network or simply offering data and calls, the telcos will have to look beyond traditional teleocm and use IoT to offer services in areas vehicle tracking, smart appliances, smart metering, surveillance and more.
Reliance Jio 5G Network
The company aims to bring the first 5G network in the country, and has already started to work on its upcoming 5G development capabilities. The fifth-generation (5G) technology and IoT will help Reliance Jio to foray deeper into the market.
Reliance Jio currenly has a ready narrowband IoT network in the country which is commercially active in multiple Indian cities.
Airtel, Vodafone & BSNL – The 5G & IoT Race
Not only Reliance Jio, but the rival telecom companies are planning on their 5G network as well. BSNL is planning to launch global 5G services, and India’s leading telecom company Airtel, and Vodafone both are already offering IoT services in India.
Airtel will soon collab with US based Verizon for a broad partnership around IoT. Bharti Airtel has initiated its IoT projects at Manesar and has established a new IoT centre in Bengaluru.
Reliance Jio To Manufacture 5G & IoT Products
To support fifth-generation (5G) technology, first the telecom companies will have to build an ecosystem to support the 5G network. Reliance Jio will soon start to develop 5G core products and bolster NFV adoption, which will essentially pave way for the development for a wider IoT platform and support for IoT applications in India.
The latest Radisys acquisition will help Reliance Jio to strengthen its domains in 5G network, IoT platforms, blockchain and SDN/NFV platforms.
5G and IoT (Internet of Things) will provide Mukesh Ambani led Jio an opportunity to build a well-connected telco infrastructure and the company will soon be able to leverage its services in varied sectors like healthcare, education, agriculture, and smart cities.